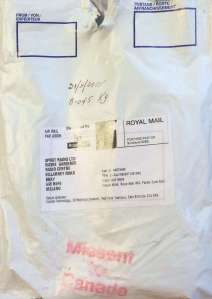 I’ve been waiting for this package for a month, so much so that I called the supplier and said its lost, they sent out a replacement via UPS. Interesting to note that the package arrived more than a month later had been ‘miss-sent to Canada’ – Firstly, I have to mention I will be contacting the original supplier to make plans to send this back to them.

So why did Royal Mail in the UK send this to Canada by mistake?

I can’t help wondering if this could it be something to do with Ireland’s new controversial Eircode system is simular to Canada’s postal-code system, perhaps?

So how does the Eircode system & Canada’s postal system differ or is it just too similar?

Both Eircode & Canada’s postal code system is split into two parts, for eircode its the routing key and the unique identifier, whilst the canada’s code similarly split between Forward Sortation Area, and the Local delivery unit. (see graphics below)

Ok so the codes are different, however I wonder because the first part of the Eircode, and that of the Canada’s code is similar and perhaps systems like Royal Mail’s system have Canada’s postal code system in their systems, but not Eircode. However the computer matched it as a Canada’s system because it was close – or of course an operator in Royal Mail didn’t read the complete address? It’s far easier to blame the computer though LOL!

Personally, I love the new Eircode system, it is a wonder to me though why a system is in place which some say is not fit for purpose, however, I would hope as the system is now out there, much of the teething issues that are raised our dealt with. Like any new system such as this, the only real way to test it is to put it into operation.

It would be nice to be able to have an eircode map, similar to the Canadian one identifying where routing keys are though. See the wiki site here. Surely that would benefit emergency services, make it easier for sat-nav to enable also.

My only hope is by the end of 2016 the teething troubles will be sorted, and Eircode will become fitter and leaner with the issues that have arisen out of its initial use would be ironed out – Eircode 2.0 ?

Start a Blog at WordPress.com.