Really excited as we are now well into summer, the weather is actually pretty good here in ireland! Got a fairly busy time coming up this month first though a quick look at the last few months high lights!

Heaven is for real – movie release in Ireland

I was so excited to have been able to partner with Sony Pictures to help promote the national movie release across Ireland with Spirit Radio. Sony provided a special preview screening for our listeners for free. It was a great event to see largely our supporters watch the pre-release of this movie returning enthused to promote back in their parishes and church groups.

My next challenge is to see the God is Not Dead movie released here in Ireland – watch this space!

It was a great joy to interview Holly Starr on the June Bank Holiday, actually through skype she joined with me for the whole hour it was like having a great co-presenter. If you haven’t yet heard the podcast do catch it whilst its still available. Holly’s new single, God is… is such an inspiration as is the young Holly Starr herself, discovered by a producer through her church submitting a you tube video! 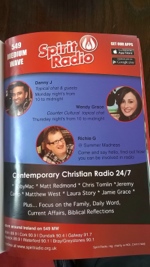 What a joy it is to spread my wings and help to promote Spirit Radio up in Northern Ireland. I had many a young person join me on the couch for a short interview, one parent said it was the high light of their weekend! A high light for me was seeing young people coming from across the country (north and south) catholics and protestants uniting under the banner of Christ. On saturday night we were joined by three politicians from the province, including the newly appointed Lord Mayer of Belfast, including standing together on the stage from the Alliance Party, Sinn Fein. These politicians said that since being and mixing with the young people at SM they said the future of this country is bright because of the young people. I have a tear of joy in my eye as I write this. To see young people standing against the tribalism of the past, the anger and hatred that satan is trying to destroy this country through the likes of the Orange order marches (and sorry if that offends but personally if that offends then you need to hear how utterly selfish, steeped in pride and arrogance these marches constitute) it upsets me to drive in the North and see much of the symbolisms of the past creating a real fear and insecurity rather than a hope, security and unity that can only come through a united people that love one another regardless of background, believe and political views. My prayer is for the younger generation for the boldness to live differently with the past behind and looking forward to a new future! [rant from my heart over]

I really hope that in future years I can see a Spirit Radio team at SM with the possibility of seeing some kind of FM broadcasts that can be broadcast over Spirit Radio.

Can’t believe I have been in ireland now for approaching 5 years, and I’m still part of the church in Dun Loaghaire continuing to prayerfully shape the youth and children’s ministry. I’m excited as we approach the autumn as we look together at the vision and direction for us as a fellowship. Please pray for me as we gather momentum and discernment for the children & youth programme going into the autumn.

A number of years ago, actually about 5 years ago, heck time goes quick, when I first attended the Radio course run by Radio Worldwide in Rothwell, Leeds! This year I’m back, and really excited to have the opportunity to share with students on the course and on the Monday I’m giving a lecture on Social Media in Radio prayer’s much appreciated. I will be there just for the first week and the first weekend of the practical week of Rothwell Carnival Radio. In addition I will need to be looking after my responsibilities at Spirit Radio through the magic of remote connections!

Rest of the summer

What about the rest of the summer, well i will be working and praying through the cirriculumn for the children/youth ministry at church. Hoping to do some radio summer workshops for Spirit Radio. And then really looking forward to attending the annual Christian Music Broadcasters conference Momentum in Orlando – so excited to be part of that. Praying that I find accommodation for this trusting God and then after will hopefully enjoy a bit of a vacation break.

Richie has been working with young people since 1992, in a variety of contexts, and in 2000 graduated from Moorlands College with a BA degree in Applied Theology/Youth & Community work with National accreditation (UK). Since then he has been involved in pioneering youth work as a Youth & Children’s worker in Berkshire, training and mentoring youth workers as a field work tutor for Centre for Youth Ministry, Oxford as well as engaging in local church work. Richie first started out in radio in 2000 with a temporary license and a show on Hope FM in Bournemouth - since then he’s been involved in various project with radio including working with 16 - 25 year olds on a millennium volunteers project in 2002 and from 2006 to 2008 worked as a volunteer for Hospital Radio in Nuneaton, Warwickshire, presenting request shows, breakfast and a Sunday afternoon specialist show. Richie moved to Ireland in the autumn of 2008 to work primarily for Spirit Radio Ireland in as the Operations Support Manager, as well as presenting a regular Saturday show and makes features and contributions to programming. View all posts by RichieGadget

Connect with me on

@fatherstumovie - One of the best Christian movies I've seen for years! its gritty, down to earth & gives a clear gospel message! @markwahlberg best performance! and #MelGibson #Legend check out my review on https://richies.blog/2022/05/14/movie-watch-father-stu/
Episode 2 | Devotions | crazy persistent faith starts by Asking..
Morning devotion. Hopefully full version
Making the most of my @starbucks_irliend #Reward caramel macchiato €7.25 for free. #Starbucks #treat

Follow Richies.blog on WordPress.com
One Lord Festival - unity in Christ

I can do all things through Christ who strengthens me..

I will praise Thee; for I am fearfully and wonderfully made: